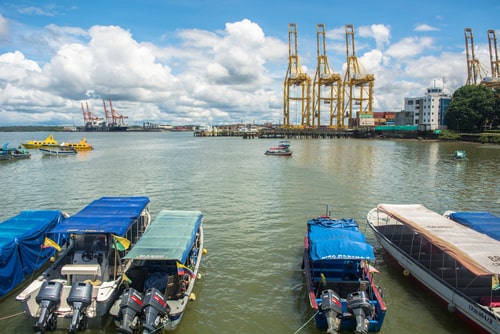 The recent political unrest in Colombia, which will not come as a surprise to insurers and risk managers, has seen blockades in and around the port of Buenaventura. The last time the protests occured, which was four years ago, the city ended up being militarized by the interior minister.

The port has an annual flow of trade over $3 billion according to ALPS Marine, making it the second largest port in Colombia. Yet, the city receives nothing in return, hence the protects.

The protestors also demanded an end to state neglect, corruption, and police brutality and nothing has changed since then. In this febrile atmosphere of corruption and a breakdown in political trust, Columbian President Duque’s 18% approval rating is the lowest since Gallup began polling in 1994.

When the protests started at the end of April, one of the main calls was for the tax reform to be shelved. The government argued that the reform was key to mitigating Colombia's economic crisis. Its gross domestic product dropped by 6.8% last year, the deepest crash in half a century. Unemployment leapt as the pandemic wreaked havoc on the economy.

As a result, the political tension is a cause of great pain for the people of Colombia. Fuel stations are empty, roads are blocked. The dismal approval rating of President Duque shows no signs of improvement.

According to Hellenic Shipping News, Buenaventura has been significantly affected by the social unrest. Cargo discharged at Buenaventura remained in storage at the three main terminals at the port owing to the suspension of road access caused by the recent blockade.

Accordingly, storage capacity at the terminals has come close to exhaustion in the absence of alternative facilities in the area. As a result, several major ocean carriers suspended cargo operations at Buenaventura pending resolution of the blockade and the reopening of road access.

Whilst Buenaventura Port remains completely cut off, Cartagena (annual flow of trade is $7 billion) and Santa Marta ($1 billion) ports are picking up the slack – but these ports are showing signs of strain.

Export volumes are significantly down on last year.

As the Maverick Coffee Trading newsletter reports, traditional coffee areas in Cali, Huila Cauca and Narino are all struggling amid their harvest. Lack of fuel and roadblocks prevent coffee grains from reaching the mills. There were reports of more than 500 containers of coffee held up on their way to ports. Lack of internal flow is also preventing forward contracts as shippers are unable to source parchment for their operations. July and August shipments are reportedly not going ahead, with September the earliest possibility now.

The annual flow of coffee exports from Buenaventura is $21 million according to analysis by ALPS Marine, making it the 5th largest port exporting coffee in Colombia.

ALPS Marine is built on Russell’s longstanding relationship with data providers to give a holistic view of maritime trade and exposure from actual events, realistic disaster scenarios and windstorm events.