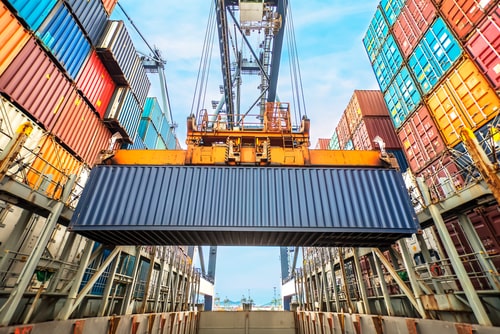 While total trade has fallen across the leading economies by in the first quarter of 2020 due to COVID-19, there is a growing concern of rising port exposure.

COVID-19 continues to inflict misery on global trade as the world’s leading economies suffer falls in trade in the first quarter of 2020 according to data by IHS Markit.

The United Kingdom has experienced the most trade disruption amongst leading economies with a decline of over 11%. Japan followed with a decline of 8.65%, the EU with 8.65%, China with 8.24%, United States with 4.16% and South Korea with 1.39% as shown below:

The main reasoning behind this, as we reported previously, is that many ports are becoming storage places of goods that cannot be shipped from ports due to ships not getting into ports and because of “blank sailings”.

For Marine (re)insurers, this should be cause for concern as most policies exclude loss or damage to cargo caused by delay. However, if cargo that is held for an extended time in a storage location or port, suffers significant damage, then who pays out? It is this grey area that marine (re)insurers need to examine because they might find themselves paying the final price.

So where are these “pinch-points”, where there is a significant amount of cargo held and stored? Our analysis has pinpointed them to the following - Bremerhaven, Germany; Klaipeda, Lithuania; Busan, South Korea; Tekirdag, Turkey; Gioia Tauro, Italy; Lome, Togo and King Abdullah Port, Saudi Arabia.

These ports form part of the Mediterranean Shipping Company’s Suspension of Transit (SOT) program to accommodate containers from Asia. These are special yard shortages at key hubs in order to allow cargo owners from Europe and North America to avoid higher demurrage costs (charge payable to the owner of a chartered ship on failure to load or discharge the ship within the time agreed).

These ports should form part of a Marine (re)insurers’ benchmark for port accumulation across global trade as exposures will become increasingly accumulated as goods are stored at these locations and then as economies unlock, there will be increased transit exposure shipping movements unlock.

What lessons are there for  marine (re)insurers? Just because trade has fallen does not mean that port exposure has reduced, is the main takeway. On the contrary, port exposure is very much a significant risk in 2020. By actively monitoring these ports as outlined above, marine (re)insurers will be able to manage and understand their ports exposures. If they do not, then they may find themselves surprised by client claims.