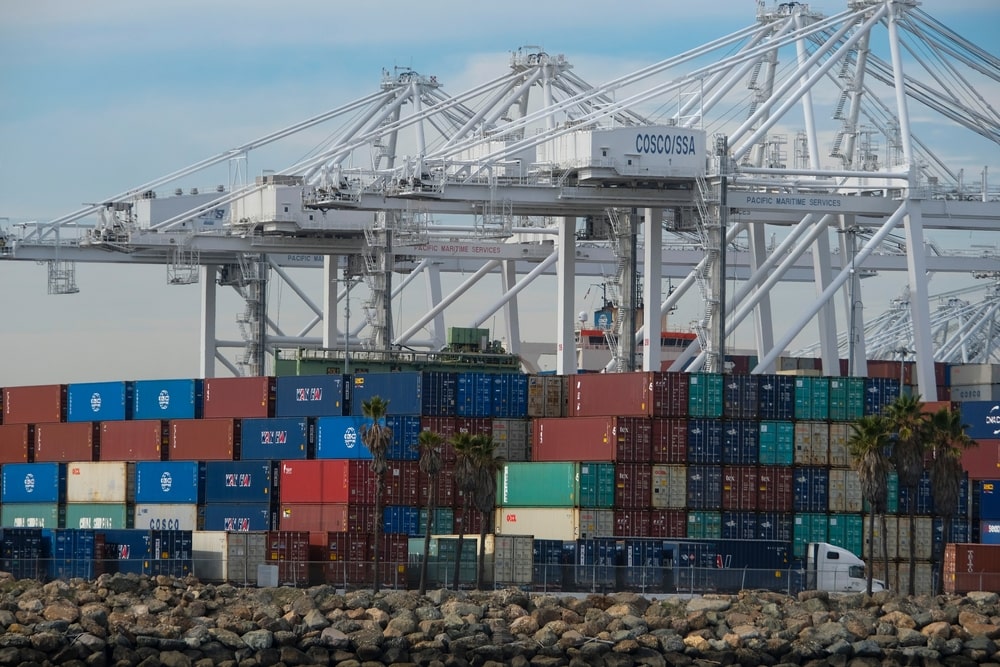 Over tens of billions of dollars in trade is currently landlocked or anchored at sea outside US and European ports, as a combination of port congestion and labour unrest disrupt global supply chains.

Further detailed analysis by MDS Transmodal, suggests that the total value of trade stuck in water is estimated to be roughly $30 billion.

With a steep raise in freight rates, mainly due to COVID-19 which has seen companies desperately sourcing key supply items, there has been a large average increase of 9% in the nominal value of goods moved by container at a global level, between 2019 to 2021, according to MDS Transmodal.

The ports of Los Angeles and Long Beach have suffered serious disruptions as a result of the COVID-19 pandemic. Yet, their nightmare is far from over.

CNBC reported that there is currently a large pile-up of containers bound for rail transportation at both ports, with 19,665 trail containers waiting nine days or longer at LA port. Meanwhile, Long Beach is reporting over 13,819 rail containers currently waiting to be moved from the port.

Roughly, 60% of all containers at both ports are destined to be moved, with MDS Transmodal estimating that the total value of those containers is $1.54 billion

“Rail containers continue to pile up in the ports in record numbers”, said Noel Hacegaba, deputy executive director of Administration and Operations at the Port of Long Beach, speaking to CNBC.

“We need those boxes to move to create more capacity and to keep the economy moving.”

Long-dwelling containers are a large concerns for any port operators, as they clog up the port’s land capacity, thereby inhibiting the movement of trade within the port. For a port to be running at an efficient level, it needs to have a land capacity of around 70%-75%. In contrast, the port of LA is a running a land capacity of 90% according to Hellenic Shipping News.

Rail Disruption Across The US

The Biden Administration recently signed on Friday an executive order prohibiting a railroads union strike in the US from occurring immediately following the ending of a 30-day cooling period, as labour organisers and companies discuss new contract negotiations.

Following the executive order, President Biden established a Presidential Emergency Board (PEB) to help the nation’s largest railroads and rail labour groups reach a contract settlement, with a view to report back to the President within 30 days.

The last major railroad strike was in 1992 which reportedly cost the US Economy $50 million a day, with experts predicting the figure to be severely higher if the strike were to occur today.

In the port of Hamburg, wage negotiations between German Labour Unions and Port Employers broke down last week, resulting in a 48-hour strike from Thursday until Saturday.

There was some signs of progress with a labour court-ordering a “peace obligation”, that many experts believe could mean no more strikes with the exception of the current strike until 24th August. Therefore, giving both sides time to negotiate a settlement.

Workers have been demanding a raise of 1.20 euros per hour for over 12,000 employees in Hamburg, Bremen, and Lower Saxony State, plus a 7.4% increase to balance out inflation according to Associated Press.

“A worsening situation in Hamburg with close to 200,000 TEUs waiting for a berth indicates that waiting times will get higher in the coming weeks”, said Alex Charvalias, lead of Supply Chain In-Transit Visibility at Marine Traffic speaking to CNBC.

Furthermore, many experts are particularly worried about the rise in waiting times at berths on the availability of empty containers.

“Containers are not easily available at the terminals nor at the inland depots,” said Andreas Braun, a Europe, Middle East and Africa Ocean Product Director at Crane Worldwide Logistics.

“Shipping lines are having extreme issues moving empties back on the return leg to Asia. This will worsen the availability of empties in Asia to be filled with exports,” he said.

Braun did note a warning to companies and indeed consumers about the impact of all this disruption on the major looming question, will Christmas be disrupted once again, adding that “importers in Europe have to expect delays to get their Christmas orders”.